In an Empath’s struggle of understanding beauty and love, the story of Eros and Psyche echoes some divine messages that love-devotees should take to heart. Not many people have heard of the material beauty feud between Aphrodite and Psyche that led her to marriage with Eros (Cupid), but it is relevant to understand the snares that come between soulmates via material desire and sexual passion.

In Greek, Psyche means “Soul” or “Breath of Life” – the essence of who a person truly is and not typically associated with material beauty (although Psyche is very beautiful outwardly, but unfortunately dabbles in commingling the soul with physical attractiveness at the very end of the story, which is at the heart of this blog entry).

In Latin, “Cupid” means desire; in Greek “Eros” means intense sexual desire that often gets associated with physical attraction between two persons. For Psyche and Eros to enter into a sacred marriage, they had to overcome multiple obstacles to substantiate that sexual desire could, in fact, persevere for appropriate union.

Sadly, while amidst love of intense passion, their love together is un-true and does not stand the test of time.

But the question is why and what can we learn from this story today?

For that to be answered we must start at….

The start of Psyche and Eros is one of purely material beauty pursuits. In summarization, Aphrodite (Venus) became jealous of Psyche’s beauty and her mortal followers who offered Psyche sacrifices rather than to the goddess, implying that Psyche was Aphrodite incarnated in human form (which she was not).

Aphrodite is offended and employs her son, Eros (Cupid) to enact revenge by a passive-aggressive strategy: Eros is to shoot Psyche with an arrow that will make her fall in love with something hideous by an intense feeling of desire (her allotment).

The Silent “Secret” Comment: Psyche’s allotment refers to the sexual arousal feeling that makes union with another individual a pleasurable experience for not only orgasm, but relief and marital closeness. Aphrodite’s attempt to thwart her allotment to a hideous creature is one of the most heinous acts that one could do to another individual, especially if such person is physically attractive. Very few women have this type of allotment, and Aphrodite was aware that Psyche was of this “breed” and thwarted to take the joy of physical pleasure with someone of equal physical beauty away from her.

Aphrodite’s jealousy stems from the fact that Psyche is a mortal who possesses both physical and internal beauty. As a result, Aphrodite, as only a goddess, is herself threatened and unable to be Psyche.

To thwart Aphrodite’s evil intent, her son, Eros (Cupid) commits an error of accidentally scratching himself with his own arrow to love the first thing he sees, which in this case, is Psyche.

Oops (however, it could have been no other way).

This leads to Psyche’s options (or fate)…or better stated as:

Aphrodite is at Conflict so Options the Dragon

Aphrodite’s jealousy of what she can never possess has created unfavorable love results for Psyche on planet earth. While her sisters have married, Psyche has yet to find love. Her father believes that wrath has been incurred by the gods and consults Apollyon (the Destroyer) who relays that his youngest daughter shall love a dragon-like creature who will harness the world with fire and iron, who is feared by Zeus (Jupiter) and Hades (Pluto). Clearly, Apollyon is defending Aphrodite’s heinous option, without realizing that Eros (Cupid) will be the dragon-like creature.

Grieved, Psyche wears the attire of a funeral where marriage and death are merged into a single right of “unknown passage”.

The Silent “Secret” Comment: The funeral attire where marriage and death are merged into an unknown passage is a simple way of saying unchartered territory that is not normal for the gods or mortals on planet Earth..as in, “it should not have gone this way above or below and as such, your time is limited.”

Psyche is Transferred to the Invisible Palace

Psyche is than transported to “her dragon” in his “palace” which is quite lovely to her own eyes. It is there that Psyche is taken by Eros (Cupid) in darkness as his wife with the simple instruction to never light a candle to view her husband’s appearance.  Eros always departs before sunrise. 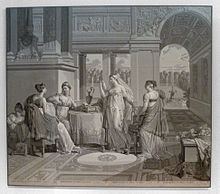 Eventually Eros (Cupid) allows Psyche to visit with her family. Her sisters become jealous of her luxurious tales and influence her to to uncover her husband’s true identity, reminding her that her husband is rumored to be a vile-like serpent.

Psyche allows her sisters influence to thwart her promise to her husband not to view him, and one night after Cupid falls asleep, Psyche brings a dagger and a lamp into the bedroom. When she lights the lamp, she views Eros (Cupid) as the most beautiful creature she has ever seen. Being so startled by him, she accidentally scratches herself with one of Eros’s arrows and is struck with a feverish passion.  Eros awakes from the spilt oil of her lamp and immediatly flees, leaving her on the bank of a river.

Aphrodite (Venus) delights in having Psyche beneath her and employs her handmaids, Worry and Sadness, to torture her by tearing her clothes and bashing her head into the ground. Yet, still Psyche is helped by others to accomplish the ridiculous tasks that Aphrodite (Venus) demands.

The tasks by which Psyche is to complete for Aphrodite (Venus) is as follows:

The very last trial that Aphrodite imposes on Psyche is to travel to the Underworld itself with a box to obtain in it a dose of beauty from Persephone, the Queen of the Underworld. Aphrodite claims her own beauty is fading because of her son and needs this remedy in order to attend the theatre of the gods.

Once again despairing of her task, Psyche wishes to throw herself off a tower until the tower suddenly breaks into speech, giving her instructions of how to enter the Underworld. The tower warns her to maintain silence, in order not to help: the lame man driving a mule with loaded sticks, the dead man swimming in the river that separates the world of the living from the dead, and the old woman who is weaving. Upon ignoring them, she is given cakes to distract the three-headed watchdog of Orcus and two coins for the ferryman to ensure a safe return voyage.

Psyche is permitted to enter the Underworld and Persephone gives her the dose of beauty that Aphrodite demands. However, overcome by a bold curiosity, Psyche can’t resist opening the box (despite Aphrodite’s instructions) in the hope of enhancing her own beauty. She finds nothing inside but an “infernal and Stygian sleep,” which sends her into a deep and unmoving torpor.

Meanwhile, Eros’s wound has healed into a scar and he escapes from his mother’s house to draw the sleep from Psyche’s face and replace it into the box to return to his mother. He then pricks Psyche with an arrow that would do no harm and lifts her into the air. Eros strikes a deal with Zeus who promises aid to him and his wife in return for Eros’s future help to woo a maiden that catches his eye. Hermes (Mercury) issues a public statement of approval and warns Aphrodite to back off and gives Psyche ambrosia, the drink of immortality so the couple can be united in marriage as equals, with the hope of redeeming Eros from his history of provoking adultery and sordid liaisons (in exception of Zeus of course).

The couple then is wed and a child born to them called “Voluptas”, which is “Hedone”, which means “Pleasure”.

In late antiquity, Martianus Capella (5th Century) allegorizes this story in equation of the fall of the human soul. For Apuleius, immortality is granted to Psyche as a reward for commitment to sexual love. Martianus, however, factually rationalizes that sexual love chains Psyche into the material world that is subject to death: chained by the engagement with another (i.e chained to the material world of which each person dies).

The idea of being beautiful and being loved are not reciprocal, and can be commingled into pleasure that is often, short lived.

To find someone who loves you for you, you must avoid looking into the “box” and deny the sole focus being hinged upon physical attractiveness of another, remembering that not even Aphrodite can chain you to a hideous creature despite the jealousy of herself and even others.

As far as sexual passion’s love dosage standing the test of time, it clearly does not. While sex, pleasure, and desire are compromise Eros (Cupid himself), it is not the highest form of love, which is Agape (God is Agape).

In the end without Agape (or God), one will lose his or her ability to even function as a human being as Eros encompasses the desire to even be oneself.